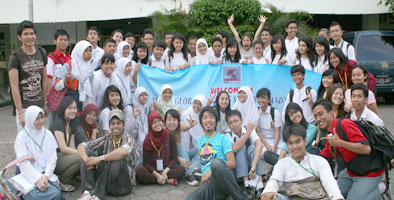 Ms. Virgi got some of her friends together to hold a symposium for Indonesian junior high school students looking at the global environment after participating in the "Global Warming Symposium" held at APU in August 2008.

The symposium was held primarily by 6 APU students from the five countries and regions of Pakistan, Japan, China, Taiwan and Indonesia. In addition to APU students, Australian, Indonesian and Malaysian university students participated in the symposium and helped as team leaders to bring together the junior high school students' opinions.

The Assistant Deputy Minister of Environment, Hanafi SULISTYOWATI and members of the NGO British Council said a few words at the opening ceremony. The symposium has received a great deal attention in Indonesia.

Over the two days the group presented lectures to provide a basic knowledge of global warming, current issues in global warming and the efforts of other countries in combating global warming such as youth movements and NGOs.

The 100 Indonesian junior high schools and 20 teaching staff split up into groups and exchanged a range of opinions on the theme of "Global Warming". The groups then developed practical ideas for schools to combat global warming and presented it to the whole group. The best idea was then selected and was then made into a declaration which everyone added their signature to. Their ideas included the creation of "green walls" and displaying photos illustrating the correct way to separate rubbish for recycling.

Looking back on the symposium, Ms. Virgi spoke of her impressions, "Unfortunately global warming is fairly unknown of in Indonesian schools. However, it is the younger generations who will have to take responsibility for the protection of our environment in the future. I was very happy when at the conclusion of the symposium the children approached me and said ‘thank you for teaching us about this phenomenon, we will do everything we can to prevent further global warming'. I am very happy that we have been able to pass on our knowledge and experience to them." 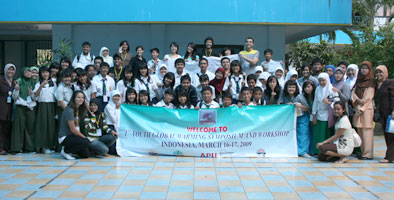