On Friday, April 17, 2009, photojournalist NAKAMURA Goro was invited by the APU Student Circle 'Traidat' to deliver a lecture at the APU Convention Hall. 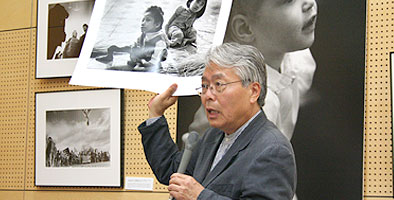 Mr. NAKAMURA is a highly renowned photojournalist who has spent almost 30 years following the story of the damage caused by the use of Agent Orange during the Vietnam War. In 1995 he received the Japan Journalist's Association Special Prize. In 1997 he held a photo exhibition in the United States of America, a past user of Agent Orange, and this exhibition at APU features many of the same photographs.

During his lecture, Mr. GORO introduced a photograph of a young boy suffering from cerebral palsy. He spoke in detail of how on every visit to Vietnam he saw that the boy's resistance to the disease was decreasing and how he was becoming more and more frail due to the dioxins. He introduced a photo of a young girl born with one arm whose father had been an American soldier exposed to the defoliant. He met the girl again, who was an adult and pregnant at the time, in America during his photo exhibition. Mr. GORO spoke of how he gave her words of encouragement as she was haunted by doubts at the time as to whether her baby would be born with disabilities. In this way, he told the audience of the seriousness of Agent Orange damage which he has come to understand through his continuous following of the story.

During the Q&A time following his lecture, one audience member posed the question, "In what position do you take your photos?" to which Mr. GORO replied, "The children without arms or legs do not feel sorry for themselves. Therefore, I don't look down on them and just take the photo as though the child were my own."

Since Traidat's establishment, they have been holding study groups and exhibitions looking at the damage caused by US Army use of Agent Orange during the Vietnam War. They are also building-up an international student network and aim to hold events looking at Agent Orange damage. Such activities have received high appraisal and in November 2008, the group was adopted into the "Asian Neighbors Network", a Toyota Foundation Grant assistance program which aims to solve the issues facing Asia. This was the first such adoption for undergraduate students. 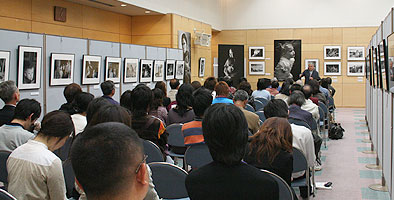