On Saturday, May 16 and Sunday May 17, 2009, the APU Model United Nations held the "Golden UN Camp 2009" at the Multipurpose Hall and Seminar House. 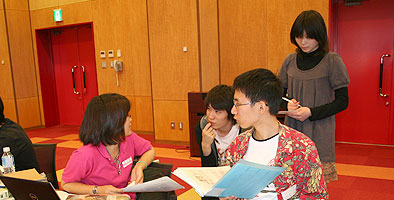 The Model United Nations is made up of students participating as ambassadors from different countries. Their activities are a way of experiencing how to come to a united-nation decision while following the decision making process employed by the actual United Nations. This camp aimed to make their new members interested in international relations by experiencing a real-life meeting.

The theme for this meeting was the ongoing Palestine issue and focused on how the international community should view and interpret an incursion and use of military force by Israel in Palestine. The official speeches (notice of decision) are held in English and debates and negotiations with other countries are held in Japanese.

First year students paired up with senior members, investigated the issue to be dealt with prior to the meeting, found out what kind of policies their country was adopting and made their proposals. Furthermore, they made resolutions and had a lively debate through the speeches and negations on the day. The debate lasted 2 days and many delegates were seen debating long and hard into the night.

1st year student KUNITA Kohei (APS1, Japan) who participated for the first time, spoke of his impressions "In such a meeting which requires a high level of ability in negotiations, I was able to learn a lot and the image I had of the United Nations has become more definite. I want to continue participating with a high level of awareness."

Meeting supervisor, MIZUE Taichi (APM2, Japan) said, "I think that through this experience of a UN meeting, the 1st year students were able to gain an interest in international relations. I want them to endeavor to know the importance of knowing the reality of the matter and finding an answer. " 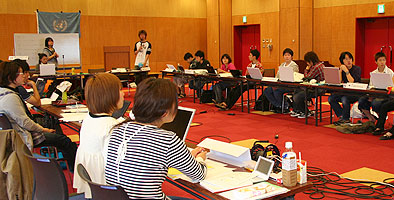