On Saturday, June, 20, 2009, members of the APU Rugby Club, and approximately 50 young members of Beppu and Oita City rugby circles took part in a "Rugby Class" held on the APU Main Ground. The rugby class was held with the aim of promoting rugby and exchange. 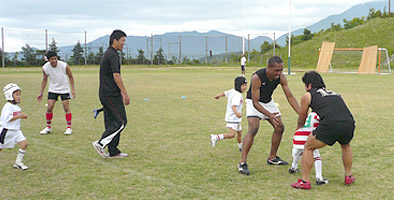 This exchange rugby class is a new club initiative which aims to make a contribution to the community through rugby. The rugby class welcomed former Japanese rep. and player for the TOSHIBA Brave Lupus, Mr. Mamoru ITO (retired, TOSHIBA) as a special coach. Mr. ITO was a university senior of SAKAI Takeshi, the coach of the APU Rugby Club since 2007.

On the day, the students received technical guidance together with Mr. ITO on scrumming and running techniques, and also played a mini-game under his motto of "passionate and fun rugby". Furthermore, on the previous day, he coached the APU Rugby Club gave them advice through an efficient training routine and taught them precise professional techniques.

Looking back on the rugby class, club representative MITOMO Shunsuke (APS3, Japan) said "All of the club members received a great stimulus from experiencing a professional training routine. Also, I hope to continue to convey the greatness of rugby to the local kids as part of my contribution to the local community."

Established in 2002, the APU Rugby Club currently has 38 members who are all training hard. In December last year they won in fine form the relegation game which promoted them to the 2nd Division. They are currently training and working hard for the opening of the 2nd Division in mid September.

This weekend on Saturday, June 27, on the APU Main Ground, they will welcome the Kumamoto University Rugby Club and hold a training match. Be sure to come along and support. 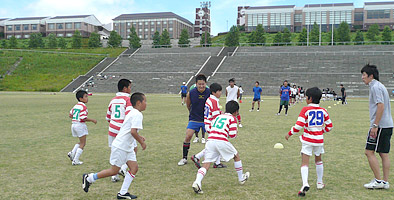