On Wednesday, June 24, 2009, a signing ceremony was held at APU to conclude a cooperation agreement between Akita International University and APU. The two universities will attempt to further deepen their friendship, advance their collaboration in the fields of education, research and social contributions, and strengthen the development of global human resources. Such cooperation collaborations which have overcome the barriers between public and private universities are rare in Japan. This is an example of advanced collaboration. The three members present at the signing ceremony from the Akita International University side were Akita International University President NAKAJIMA Mineo Ph.D, Member of the Board of Trustees MATSUHIKO Sasaki, and Office of Student Records SUDA Yukiko. The four members representing APU were President Monte CASSIM, Vice President KORENAGA Shun, Dean of Academic Affairs Edgar PROTER, and Dean of International Cooperation and Research SANGA-NGOIE Kazadi. 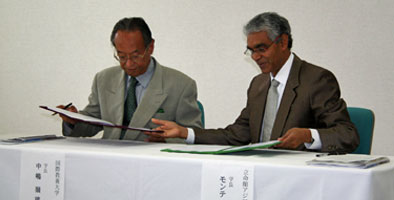 President NAKAJIMA spoke of his expectations, "Akita International University is aiming for multilingualism. I hope that our universities can be compatible and complimentary. I would like universalize study at regions such as Akita and Oita Prefectures, and work towards becoming a global centre."

President CASSIM spoke of his hopes for the agreement, "There are many ways to develop people and I hope to take advantage of this chance to provide many opportunities for exchange. I want our international students to know the country of Japan, have an interest in the Tohoku area and realize just how diverse Japan is. I also hope that our domestic students are stimulated by the students of Akita International University and work even harder in their studies. 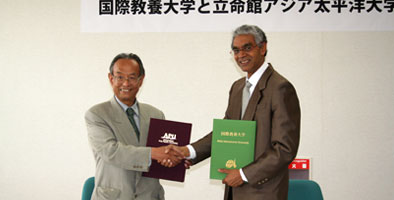 Joint environmental research is planned for Mt. Chiokai, Akita Prefecture, later this summer. While utilizing existing programs, the two universities will actively advance credit transfers and student/faculty exchange and endeavor to enrich their education and research.