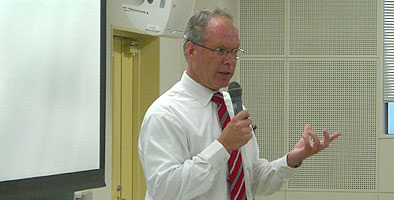 During his lecture, Mr. Dirk-Jan Rijks introduced SOFITEL Luxury Hotels using impressive promotion videos and a power point display and explained a range of aspects such as the company's philosophy, training and development programs and the repositioning of the SOFITEL brand which has been underway for the last two years.

He described how through the current repositioning the company is introducing new initiatives and attempts to "set the trend through creating new customers, a new attitude and new products". For example, he described how all staff in all SOFITEL hotels greet their guests with "bonjour" regardless of geographic location as a way to strengthen the brand name and differentiate the company from rival hotel chains by drawing peoples attention to the fact that it is a French company.

To further emphasis the French flavor of their hotels, he described the emphasis placed on French elegance in innovation and design, food and beverages to create a total French experience for their guests.

In response to a question from the audience, he described the kind of human resources sought after by the hospitality industry, "You need to be open-minded, have the right mind set and attitude, and understand what's happening on the work floor. You can't tell the waiter they are doing a bad job if you yourself don't know how to open a bottle of wine".

The lecture proved to be a great opportunity for students interested in the hospitality industry. At the conclusion of the lecture, Mr. Dirk-Jan Rijks distributed his business card to the students. Perhaps we will see some APU graduates working for SOFITEL Luxury Hotels in the future. 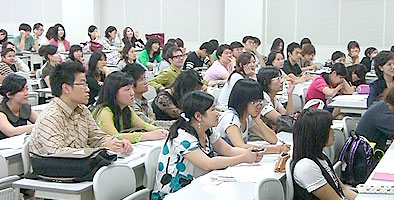