On Sunday, July 5, 2009, ten members of the APU circle "MUSY TONE" performed at the "AOE Festival" held at AOE Primary School in Tsukumi City, Oita Prefecture.
The 10 students from Vietnam, China, Myanmar, Norway and Japan who participated in this local event dressed themselves in a range of folk costumes from such countries as India, Thailand and Indonesia and performed 9 songs such as "If you're happy and you know it, clap your hands" –a song well know in Japan –the Chinese song "Rang shi jie chong man ai" (Fill the World with Love), and the Vietnam song to count the falling stars "Dem Sao". Their performance of "If you're happy and you know it, clap your hands" proved to be a real hit with the crowd as they sang in the the true APU style– in 12 different languages.

Looking back on the "AOE Festival", APU Chorus Circle MUSY TONE representative DAO THUY DUONG (APM", Vietnam) said, "I have participated in this kind of local exchange a number of times before, but being able to perform a Vietnamese song at the AOE Festival and introduce my culture to the people of the region makes me very happy. Furthermore, I was able to learn about the Japanese culture as an international student participating in a Japanese festival. I hope to continue to participate in such events in the future if I get the chance."

MUSY TONE is a chorus circle established in 2006 that currently has 37 members including 11 domestic and 26 international student members from such countries as China, Myanmar and Norway who aim to send a message of harmonious coexistence to not only the campus but also the region and greater world. In addition to individual and joint concerts on-campus, the circle also actively gives performances to the people of the region of the songs of different countries and regions at off-campus events. 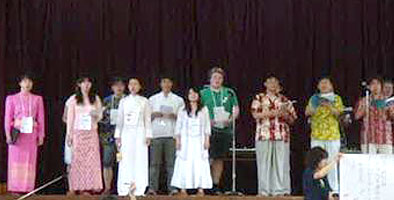