On Monday, July 20, 2009, twenty six high school students participating in the 10,000 High School Students Signatures Campaign visited APU during the Open Campus, gave an introduction of their activities and thoughts towards the abolition of nuclear weapons, and gathered signatures. 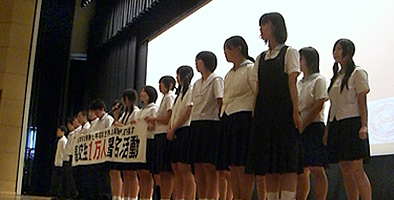 The visit came about from the peace exchange tour held in May this year held jointly APU and the 10,000 High School Students Signatures Campaign Executive Committee. During this program the group visited the Nagasaki Atomic Bomb Museum, exchanged opinions and worked together to collect signatures. At that time, participation in the signature appeal was voluntary, but all of the students on the tour, including students from countries which possess nuclear weapons such as the United States and China, got involved.

During the introduction of their activities at the Millennium Hall, students involved in the signature appeal introduced their activities and spoke with ardor of the abolition of nuclear weapons. TAMAKI Ayumi (APS2, Japan), one of the students who took part in the May peace tour, spoke of what she learnt through the peace tour in Nagasaki and appealed to the high school students in the following way: Nothing will happen if we don't do something. I want you to do what ever is in your power to do. You may only have a small amount of power, but you are not powerless. The high school students who came from both Oita and neighboring prefectures for the Open Campus Day were seen listening intently to the presentation. 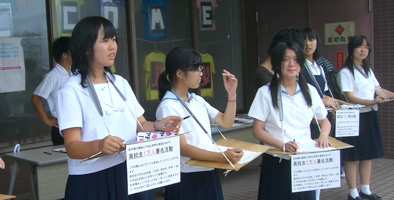 One of APU's fundamental principles is "freedom, peace and humanity" and every year in autumn APU holds a peace exchange tour to Kyoto with Ritsumeikan University and is involved in peace studies. We will continue to provide international students with the opportunity to learn about Japanese culture and history.

*The "10,000 High School Students Signatures Campaign" began in 2001 during the India/Pakistan nuclear tests as a way to send Nagasaki's hopes for peace to the world. In this program, "High School Student Ambassadors" were dispatched to the United Nations and upon their return to Japan, began through their own efforts working towards the eradication of nuclear weapons. The collected signatures are presented directly to the United Nations by the High School Student Ambassadors. Furthermore, the students are planning and running a range of events in addition to signature appeals such as the "High School Student 10,000 Pencils Campaign", the establishment of an Asian Children Fund and signature petitions in Korea, America, Brazil and New Zealand. 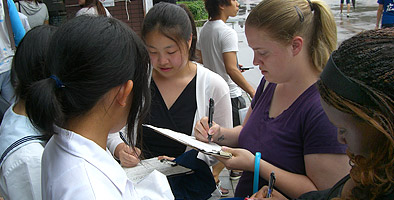