On Friday, September 18, 2009, the 2009 Fall Semester AP House Welcoming Ceremony was held at the APU Millennium Hall for the new AP House (*1) residents. 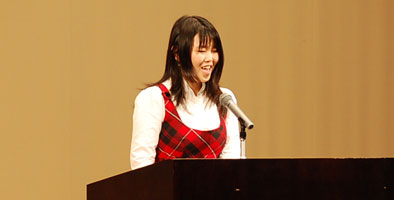 The new residents were made up of 523 international students from 62 countries and regions, and 9 domestic students. Over 500 new residents and Resident Assistants (RA*2) attended the ceremony.

The ceremony was presided over by RAs and included a welcoming address by the Dean of Student Affairs, Professor KIM Chan Hoe. Following this, TANG Lihui (APM, Canada) represented the new residents and spoke of her expectations of her new dormitory life.

Following an introduction of staff and RAs, a video was shown on dormitory life etiquette. The video was made by and stared RAs and featured everyday dormitory life routines such as rubbish separation and recycling procedures. The humor of the RA performances proved a hit with the crowd and soon filled the Millennium Hall with laughter.

*1: AP House
AP House is a student dormitory where international and domestic students live together. International students spend their first year at AP House to learn the ways of Japanese life. Able to house 1310 people, it has 932 single rooms and 378 shared rooms.

*2: Resident Assistants (RA)
RAs live in AP House and provide a range of support such as the promotion of exchange within the dormitory, hygiene and sanitary management, and help the residents to solve any issues which may arise in their dormitory life. 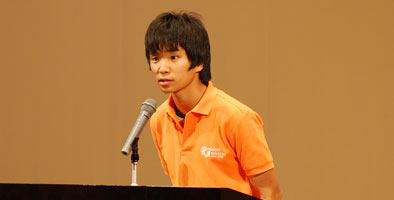