On Saturday, June 18, 2005 the APU student volunteer group Ai no Nami held charity performances at the Mitsukoshi Lion Hiroba in Tenjin, Fukuoka to raise funds for the victims of the tsunami disaster. The performances were part of the Fukuoka Airport Event and various airline companies; the Australia Tourism Bureau; and various businesses associated with the tourism and travel industry participated.

At the open space, representatives of Ai no Nami explained the present situation in the countries affected by the Sumatra Earthquake and the purpose for their charity events. The vivid band performances and displays of ethnic dances by the thirteen international and domestic students caught the attention of the passerby's and many sympathized with the group's plight and made a financial contribution. We would like to thank everyone for their support. 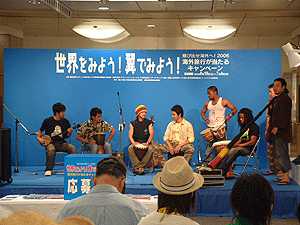