The recent Typhoon Ketsana, locally referred to in The Philippines as Ondoy, struck northern Philippines and has left in its path a devastating trail of destruction that not only cost over 250 lives, but also left nearly a quarter of a million people living in temporary shelters. In response to this natural and humanitarian disaster, "Task Force ONDOY", a group of APU students led by OPINION, Rina (APM1, Philippines), have come together to raise money for the relief efforts, forming an organization called "Help for the Philippines During Natural Disasters." 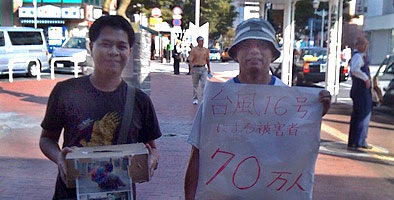 From Friday 9 until Friday 16, October, 2009, Ms. OPINION and her group –working closely with the APU student circles Habitat APU and Sun Piccolo Project- will be displaying photographs at the APU Cafeteria of the affected areas to make APU students more aware of the scale of the calamity and inviting students to make a donation. They will also carryout a donation street appeal outside JR Beppu and Oita Stations from October 9 until October 16 between 10:00-16:00 (excluding Tues 13, Thu 15).

"Task Force ONDOY" representative Ms. OPINION spoke of her hopes for the relief effort, "We know that the citizens of Beppu and the APU community strongly sympathize with the victims of Typhoon Ondoy. We can all do a little more by donating even just a small amount to the ongoing relief and rehabilitation efforts in the Philippines."

All proceeds will be donated to two Philippine organizations: the Caucus of Development NGO Networks (CODE-NGO) and Free the Children Japan (Philippine Operations) and will be used to provide desperately needed relief supplies. Based in the Philippines, CODE-NGO has 6 national and 6 regional member networks, representing more than 2,000 development NGOs, people's organizations and cooperatives.

The Asia Pacific region has recently experienced a spate of destructive natural disasters which have destroyed entire communities, cost the lives of hundreds and left many more tens of thousands homeless. APU students have a proud history of heeding the call and providing their support and aid for those affected by such catastrophes. Let's hope that our efforts continue to play an important role in the reconstruction process. 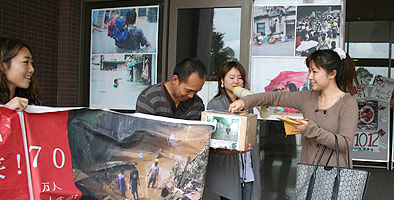