On Friday, October 16, 2009, Ambassador of Ecuador to Japan, H.E. Mr. Javier PONCE visited APU and met with President Monte CASSIM.
H.E. Mr. PONCE spoke of the cooperative relationship between APU and the Universidad Del Pacifico, Ecuador (Eng: University of the Pacific) with whom APU has concluded a university cooperation agreement, "We look forward to even more proactive researcher and student exchange". In response, President CASSIM said, "Ecuador has such a rich natural environment and I hope that we can strengthen our environmental research connections."

H.E. Mr. PONCE visited APU to attend the conclusion ceremony of the JICA commissioned "Andes One Village, One Product" two week training program which took place from October 5 – 16. A reception was held at the conclusion of the ceremony where the Ambassador, researchers and APU faculty enjoyed chatting and deepening friendships.

There are currently 25 international students from the Latin American region studying at APU (as of May 1, 2009). It is hoped that in the future APU will continue to enrich its ever-increasing range of nationalities represented on our multicultural campus, accept more students from the Republic of Ecuador, and strengthens our ties with Latin America and the Republic of Ecuador. 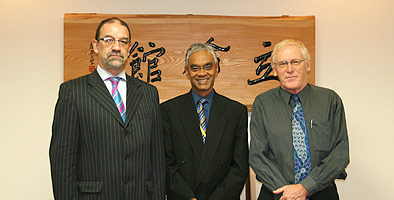