On Tuesday, November 10, 2009, Ritsumeikan University Graduate School of International Relations Visiting Professor and President of the Japan Foundation, Mr. Kazuo OGURA delivered a special lecture entitled "Food, Music and Gift in Diplomacy" as part of APS Professor FUJIMURA Kazuhiro's International Organizations EA course.
During his lecture, Mr. OGURA described how the food, music and gifts presented to guests at diplomatic meetings can imply the expectations of those who serve them. Giving examples of from Japan-US, Russia-Europe, and US-North Korean diplomatic visits, he introduced the hidden meanings implied by the food, drinks and gifts provided on each occasion.

The lecture was well received by the many students who attended and Mr. OGURA welcomed questions throughout his lecture. It could be seen from the active participation in the Q&A session that the students have a great interest in diplomacy and international affairs. HIRATA Mariko (APS4, Japan) who attended the lecture, gave her comments, "I was surprised by the fact that communication not only conveys culture, but also serves a strategic diplomatic purpose with an ability to send a message to the opposing nation. The lecture was a great opportunity to consider diplomacy from a different perspective."

A veteran of the Foreign Service, Mr. OGURA has served as Director-General of the Cultural Affairs Department, Director-General of the Economic Affairs Bureau, and Deputy Vice Minister of Foreign Affairs. He also served as Special Personal Representative at G7 and G8 Summits, the Japanese ambassador extraordinary and plenipotentiary to Vietnam, South Korea and France. He has served as President of the Japan Foundation (*1) since 2003. In November 2009, he became a member of the APU Advisory Committee (*2) in approval of the APU educational principles. A space in the APU Library will shortly be available with a collection of his published works (in Japanese and foreign languages) for readers to enjoy.

*1 The Japan Foundation
The Japan Foundation is Japan's foremost organisation involved in comprehensive international cultural exchange programs and aims to deepen the mutual understanding between Japan and other nations and work towards a peaceful future for the entire world.

*2 The Advisory Committee
Established before the university opened, the Advisory Committee aims to provide multifaceted support to the University and currently has 319 members (as of January 2009) including former heads of state of nations around the world, ambassadors, and leading figures in the Japanese business and economic circles. The Committee continues to make a range of contributions to the development and enrichment of study and research at APU. 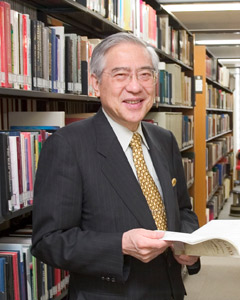