On Saturday, November 21, 2009, APU student CHANG Su In (APS4, Korea) claimed top prize at the "1st Kyushu-Okinawa Area Indonesian Speech Contest". Held in Fukuoka City, this event was hosted by Persatuan Pelajar Indonesia di Jepang – an Indonesian exchange student support group.
Under the theme of "I want to be the Sun", Ms. CHANG spoke of her memories of a one year exchange to Ritsumeikan University and of taking part in support initiatives at an orphanage in Bali, Indonesia with the student volunteer circle "Matahari" – the Indonesian word for "Sun". Ms. CHANG spoke of how she initially had pity for the children she was helping, but before long she began to approach them as simply people and ultimately, as people she would like to have as family members.

In addition to delivering her speech to the large crowd which had gathered at the "Indonesian Charity Day", held on the same day as the speech contest, she also won the right to represent the Fukuoka area at the National Indonesian Speech Contest scheduled to be held in Tokyo next year. In addition to Ms. CHANG, a number of APU students took part in the "Indonesian Charity Day" and added a special touch to the proceedings with a performance of a traditional Indonesian Saman dance.

Looking back on her achievement, Ms. CHANG commented, "I am very thankful to my many Indonesian friends for their cooperation and Junior Lecture IRA who guided me along the way. I am also thankful to the APU educational environment for giving me the opportunity to study Indonesian. In the future I hope to get involved in activities supporting street children in Indonesia, and this victory has moved me one step closer to realizing my dream".

APU has set up the Language Center and is engaging in the teaching of Malay-Indonesian as one of the languages of the Asia Pacific region (AP Language). 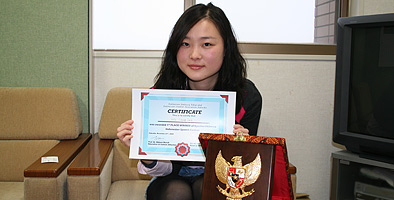