From Sunday, December 6 until Wednesday, December 9, 2009, APU hosted an `Invitation Program' for Australian university students studying Japanese. This program is a new initiative under the auspices of the JENESYS Program*. The aim of this unique program is to deepen Australian youth's understanding of Japan through visits to major Japanese industries, lectures on Japanese society and interaction with Japanese people. 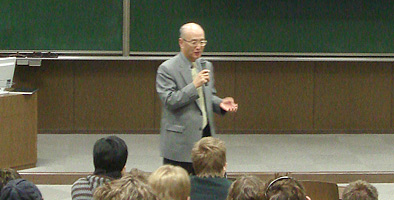 During their stay in Beppu, the Australian students had the unique opportunity of experiencing a different part of Japan. The group was guided by APU students around the sights of Beppu City, and visited several jigoku (hells) and onsens (hot springs) as well as Mt. Takasaki (Oita city). During their visit to Ajimu (Usa City), the group learnt about green tourism, a feature of Ajimu.

APM Professor and Dean of Careers, Mr. Kenji TAKANO delivered a lecture about Japanese corporations. Based on his 37 years of experience at NEC Corporation including 4 years as President & CEO of NEC Europe, Professor TAKANO spoke about working in Japanese organisations. The session was interactive and students raised a number of questions in both Japanese and English regarding the average salary for a graduate in a Japanese company, the seniority system, bonus schemes, gender discrimination, and opportunities for foreigners in Japanese companies. Following the lecture, the students visited the Oita branch of Oji Paper Group and listened to the first hand experience of the young employees.

The Australian students were impressed with APU's multicultural environment and a number of whom showed interest in returning to APU as exchange student and some members expressed their hope to enter the APU graduate school. Let's hope we see them back in the near future.

*The JENESYS Programme is a Japanese Government program designed to deepen understanding of the different aspects of the Japanese society including politics, diplomacy, economics and culture, and aims to promote mutual understanding between the future generations of ASEAN and East Asia Summit member countries. 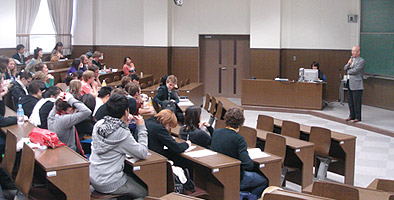