On Wednesday, January 13, 2010, a New Year's experience event was held at APHouse – one of the largest student dormitories in Japan in which both international and domestic students live out their university life. Held in APHall, the "New Year's Around the World" event filled the dormitory will fun and laughter. 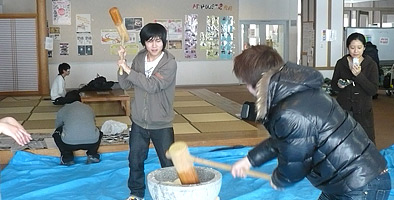 This New Year's event was primarily managed by House Staff – a group of house residents that organize and manage a range of House events – and was held in four sections, "Games of Japan", "Games of the World", "Food of the World", and "Food of Japan".

Participants in the "Games of Japan" corner enjoyed "Sugoroku" (Japanese backgammon) and "Fukuwarai" (Japanese face-game variant of "Pin the tail on the Donkey"). The students also wrote, with a strong hand, their New Year's resolutions and goals for 2010 with Japanese calligraphy brushes. "Food of Japan" participants enjoyed making Japanese rice cakes which were later distributed throughout the participants. Many students trying rice cakes for the first time were surprised with the unique texture and flavor. In addition to Pakistan and Chinese-style New Year's food, a number of New Year's events were held such as "Kemari" – a traditional Korean ball game.

Event management leader and organizer of the "Games of Japan" corner, OSHIMA Takahiro (APS1, Japan) spoke of his aspirations for the future, "It was impressive to see a number of dormitory residents getting to know each other for the first time through this event. I hope to continue to plan further such events that provide for an even more fulfilling dormitory life".

APU currently has students from 97 countries and regions and has established APHouse as one of the largest international education dormitories in Japan. Resident Assistant (RA) Student Support Staff and dormitory event planning and management House Staff work to ensure that dormitory residents get the very most out of the APHouse experience. Held approximately once a week, House Staff organize a number of student interaction and exchange events such as "AP Café" featuring cooking from countries around the world, and the "AP Cinema".

APHouse is not merely a place to live, but is also increasing active as an international education dormitory. Please look forward to further developments. 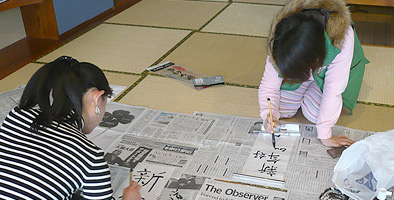