Nearly 50% of the APU student body is made up of international students and over 40% of our faculty members are foreign nationals active on the global stage. APU Professor of Media Studies, Peter MANTELLO has a colorful background as a photographer covering the civil war in Burma (Myanmar) and living with locals in the rebel controlled areas along the Thai-Burmese border. His current research interests center on algorithmic culture, video games and narratives. 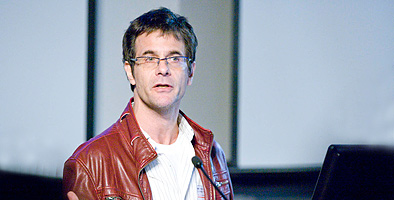 From Thursday, January 21 until February 5, 2010, the "Child Soldiers exhibition in Japan 2010" was held on the APU campus by APU Professor of new-media Peter MANTELLO and co-curator Leora KAHN – the Co-founder and President of the New York based NPO "PROOF: Media for Social Justice" and editor of "Darfur: Twenty Years of War and Genocide in Sudan". The exhibition was well received by the many students and members of the local community who came along to view the over eighty photographs on display captured by eleven world-renowned photographers.

Following the success of the exhibition's first showing earlier in January in Tokyo, this second exhibition gives the viewer a glimpse into the lives of child-soldiers in war-torn regions around the world including Liberia, Burma, Nepal, Colombia and current war hot-spots Iraq and Afghanistan. The disturbing images feature guns in the hands of teen-agers, boys and even a toddler under the proud eye of his father.

Professor MANTELLO commented on his motivation behind having the exhibition at APU, "I wanted to hold this exhibition here to make people more aware of this growing problem because without awareness, it will never be confronted and resolved. At APU we have students from 97 countries and regions, many of whom come from areas where child soldiers are active, and my hope is that through viewing these images and becoming aware of this phenomenon, our students from these areas will contribute to the solving of this problem and the establishment of democratic and stable governments."

One visitor gave their impressions of the exhibition, "The pictures were very disturbing because you could see from their clothing and physical size that they were children, but their expressions were like a fearless veteran soldier. They have become desensitized to war and it is sad that they've been robbed of their childhood to serve a cause they can't yet fully comprehend. Perhaps more disturbing is the fact that many of these children may have since died in combat." 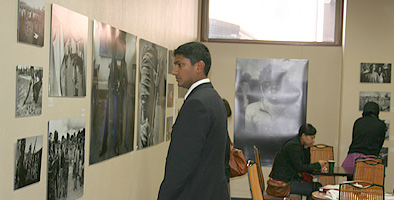