The Meeting was attended by a number of high-profile people including Mr. YUCHENGCO, the former-President of The Philippines Mr. Fidel RAMOS and former-Prime Minister Dr. Cesar VIRATA, who all engaged in a lively exchange of ideas and opinions on a range of topics including collaboration with The Ritsumeikan Academy – the only foreign party in attendance. Honorary Chairman of the meeting, former-President Fidel RAMOS enjoyed sharing his views on issues in higher education and problems facing Southeast Asia, East Asia, and the entire world. Both the Yuchengco Center and the Ritsumeikan Academy reaffirmed their desire to further deepen their relationship and the meeting proved to be a valuable opportunity to get an insight into future developments of the Yuchengco Center and the Ritsumeikan Academy.

At the conclusion of the meeting, Chairman NAGATA visited De La Salle University and met with the University President. Meanwhile, APU Vice-President COOPER and APS Professor FELLIZAR visited The University of the Philippines Los Banos and met with the University Chancellor and Director of the Southeast Asian Regional Center for Graduate Study and Research in Agriculture (SEARCA). The group enjoyed an exchange of ideas and opinions on the future of educational and research exchange between their respective universities.

*The Advisory Committee (AC)
The APU support organisation was established in May, 1996 and provides a range of support towards the further development of education and research at APU. Its members include former heads of state, ambassadors and leading figures in the Japanese business and economic circles.
In addition to the Advisory Committee, a number of prominent figures have taken up positions as Academic Advisors who also provide support towards the further improvement of APU education and research. Members include Nobel Prize winning scholars, prominent researchers and individuals from research and educational circles. 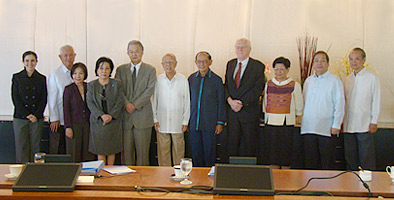