"On a summer night...memories of a gathering...intermingling" – Wave Amphitheatre comes to Life in a Festival of Japanese Music & Dance.

On Tuesday 19 July, APU student registered organisations combined their efforts to stage a traditional arts performance at APU's outdoor Wave Amphitheatre. The performances took place before a huge audience enveloped in an air of excitement.

The event, entitled New Performance - Deai, was a collaboration of five traditional Japanese arts circles working together from the planning stages to the management of the event. Great pains were taken to create the feel of a Japanese-style festival with billboards of mock-gold-leafed folding screens on display; hand-made folding fans with the schedule of the event; and bamboo candles lit to create an objet d'art effect. The sight of people strolling through campus grounds dressed in summer kimonos prior to the performance only added to the excitement.Proceedings commenced at 7:30pm with Kagura-sha performing Shonai-style (Oita Prefecture) kagura (Shinto music and dance). The performers scampered about on stage inexhaustibly in a criss-cross fashion, and capturing the audience's gaze was the God of destruction Kojin. Running counter to this display was the womanly figure of a Princess moving in subtle and enchanting rhythmic motions. The whistling-like sounds of the flute and the beating taiko drums conjured up reminiscences of days long gone. As the intensity of the performance increased the audience found themselves increasingly fixated by the energy produced on stage.

The second performance Eisa- was by Okinawa traditional arts circle Eisa-Danchanpuru~. Added to the enticing tones of the Okinawa shamisen was the thunder-like pounding of the big drums (odaiko) to the festive chants of "I-ya-sa-sa!". From the start until the very end the sight of people joining in the procession and dancing in unison was one to behold. 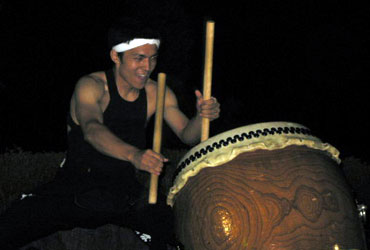 The third act to take to the stage was Mai"Raku" which performed Nanazumai (an Iwate Prefecture-style dance). Men and women dressed in Eboshi (Asiatic head gear worn by court nobles) and colourful costumes played small hand-held drums know as chappa to the rhythm of flutes and drums. Indeed the presence of the Gods was felt as long swords were swung around in controlled movements to the ferocious sounds of feet stomping on the ground.

This performance was followed by Wadaiko"Raku". Their first act was Demon. The powerful imagery created by the performers' hands waving in the air captured the essence of the act's namesake. The next act was an original entitled Wind which incorporated the majestic sounds of the flute to create a performance laced with intensity and calmness. The teamwork of Wadaiko"Raku" shone through as small and large taiko drums were used to create tranquil rhythms. The audience was enthralled by the technical ability – perfected after years of training – of the more experienced members of the group.

The final performance was by Arauma Chiyo – an Aomori traditional arts circle. To the festive sounds of the chappa, flutes and taiko drums, men riding wooden horses paraded around on stage. Members of the audience were taken by the uplifting mood of the performances as was evidenced by the smiling faces that filled the Wave Amphitheatre. 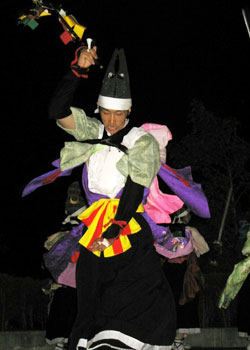 Proceedings were brought to a close with TANAKA Hisataka (APS 2nd year), on behalf of all the performers, declaring the event a great success. He had the following to say: "This was our first attempt at such an event and we were nervous, but in the end we too were able to enjoy the performances. We would like to thank everyone for coming here tonight and lending their support".