On Monday, March 29, 2010, the METI Trade Policy Bureau Deputy Director-General for International Regional Policy, Mr. SHIOTA Makoto and accompanying echelon visited APU and enjoyed a meeting with APU President KORENAGA Shun and Vice-President YAMAGAMI Susumu.
The group visited Oita Prefecture and APU to secure assistance for the APEC Economic Committee High Level Policy Round Table to be held in Beppu City in August later this year. In addition to introducing the Economic Meeting, Bureau Deputy Director-General SHIOTA hoped that, "APU will also cooperate by holding workshops and providing student assistance", to which President KORENAGA responded, "Many of our students come from APEC member nations and we look forward to providing assistance for the APEC meetings".

In the past APU has invited government officials from a number of countries and regions around the world to take part in meetings of this kind including the Students' Summit and Water Summit. Our students also volunteered their services at the 2002 FIFA World Cup. 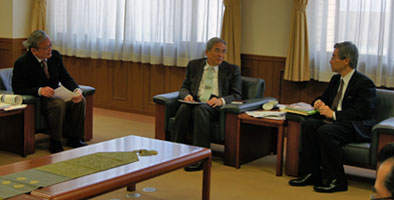