On Tuesday, April 6, 2010, APS Associate Professor MEIRMANOV Serik delivered a presentation in Kurchatov City, Kazakhstan – home of the Semipalantinsk Nuclear Test Site (SNTS) of the former Soviet Union. Focusing on the rate of cancer occurring in the surrounding areas due to radioactive exposure, the presentation was given to the United Nations Secretary-General Ban Ki-moon, Kazakhstan Government officials, and officials from Semipalantinsk and Kurchatov City. 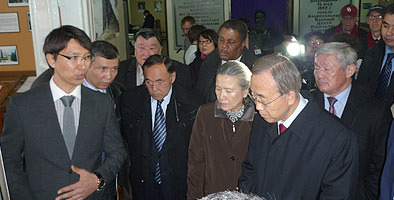 During the presentation Dr. MEIRMANOV presented the research methods and finding of his scientific investigation into the occurrences of cancer due to radiation in the areas surrounding the SNTS. In addition, he also proposed the establishment of a Radiation Medical Centre to harness radiation for medical treatment purposes – not as a weapon of mass destruction.

Against a backdrop of a global trend towards nuclear reduction and disarmament, this lecture was held at the invitation of Semipalantinsk City to coincide with the official visit of UN Secretary-General Ban Ki-moon to Kazakhstan – a country that gained the attention of the world for its renunciation of nuclear weapons and closure of Soviet nuclear test sites soon after the collapse of the Soviet Union.

A native of Semipalantinsk City, Dr. MEIRMANOV gained a PhD from the Nagasaki University Medical School before taking up his current post at APU teaching health science and informatics. Dr. MEIRMANOV is continuing joint study with Nagasaki University into "identifying the cancer causing effects of nuclear explosions through examining cancer cases in areas surrounding the Semipalantinsk nuclear test-site of the former Soviet Union". 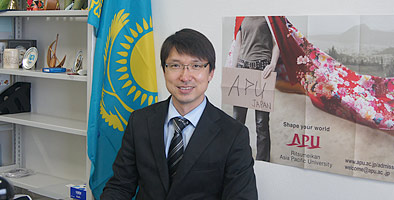