On Saturday, April, 10, 2010, local media, economic, government and educational leaders came together for the "The 10th Anniversary APU Presidential Commemorative Dinner with Local Representatives" held at the Sugino Hotel, Beppu City, as an opportunity for APU and the local community to discuss their future together. 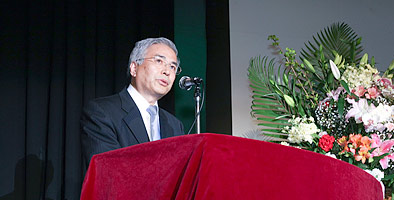 Held to mark the APU 10th anniversary, the inauguration of the new APU President, KORENAGA Shun, and express the university's gratitude to the local region, the gathering welcomed over 170 guests from the local community and around Kyushu and was hosted by the former Prime Minister of Japan, Mr. MURAYAMA Tomiichi, the Governor of Oita Prefecture HIROSE Katsusada, Mayor of Beppu City Mr. HAMADA Hiroshi, and Chancellor of the Ritsumeikan Trust, Mr. KAWAGUCHI Kiyofumi.

APU Vice-President YAKUSHIJI Kimio began the proceedings with an opening address followed by former Prime Minister, Mr. MURAYAMA Tomiichi, who spoke on behalf of the hosts. APU President KORENAGA Shun, appointed in January earlier this year, then addressed the audience, "Since the university opened, we have enjoyed the support of leaders, ambassadors and representatives from the region and around the world. International students comprise nearly half of our APU student body and represent nearly 100 different countries and regions. As an educational resource belonging to the entire international community, we will continue to work towards becoming a bridge linking nations with nations, and regions with regions".

President of the National Institute of Information and Communications Technology, and former President of Osaka University, Dr. Hideo MIYAHARA, then addressed the audience followed by President of the Kyushu Railway Company, Mr. KARAIKE Koji who gave a short speech and introduced former APU President, Prof. Monte CASSIM. The participants then enjoyed an exchange of thoughts and opinions on the future of APU and their region.

During the dinner, results were released of an Oita Prefecture investigation into the economic ripple-effects felt by the region as a result of the invitation of APU to the Prefecture.
Please click here for more details. 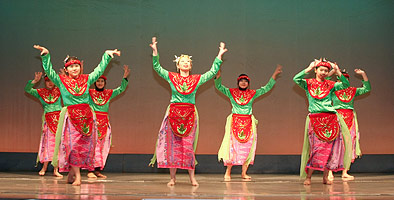