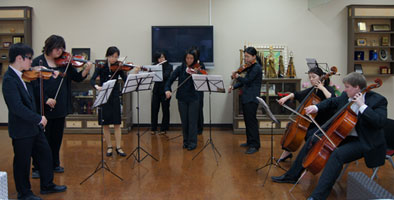 Performing at the Pacific Café, the APU Symphony Orchestra performed six instrumental pieces over their 30 minute show including "Stand by me" and "It's a Small World". Attended by a large number of students and faculty staff members, the concert performers also introduced their circle activities to the audience and welcomed all music-loving new entrants to join them.

Following a short interval, the APU Wind Orchestra then attracted a large number of students to the western corner of Cafeteria and soon had the audience clapping and tapping their feet to the rhythm with four instrumental performances including the TV theme-songs "Jounetsu Tairiku", "Sazae San a la Carte", and the perennial favorite "We are the World".

Commenting on the reasons behind the name of the event, the "Fan Club and Welcome Concert", APU Symphony Orchestra representative, BAEK Woon Young (APM3, Korea) said, "We wanted the new students to know about and become fans of our circles. We would also like to provide a recreation outlet to all lovers of music by using the musical skills we have acquired."

APU Wind Orchestra representative, FUNAKOSHI Sakie (APS2, Japan) expressed his thanks to the large crowds and commented, "Music is such an important part of our life so I hope that this concert motivates my fellow students to develop a greater interest in music."

The APU Symphony Orchestra and The APU Wind Orchestra are some of the most active music circles at APU and have been participating in a range of performances both on and off the campus throughout the year. 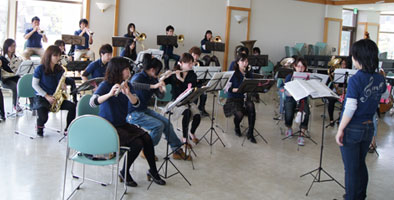