From Friday, May 7th until Sunday, May 9th, 2010, fourty-one APU students from fifteen different countries and regions visited Nagasaki and participated in an exchange program with high school students taking part in the "10,000 High School Students Signatures Campaign"*. 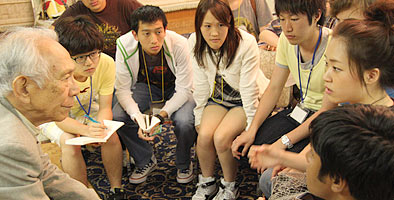 Now in its second year, the Peace Tour aims to provide an opportunity for students to learn more about the tragic Japanese experiences of atomic weapons through visiting the actual sites that witnessed the atomic bombings some six decades ago.

Leaving APU on the evening of 7th, the group began their tour of Nagasaki on the following day which saw them visit the Nagasaki Peace Park and historical Nagasaki Atomic Bomb Museum with a group of local high school students. This gave them the opportunity to get a first-hand look into the priceless pictures and displays, and also listen to a speech by Mr. HIROSE Masahito (80), a survivor of the atomic attack, who illustrated to the group the true nature of this unforgettable human tragedy.

The third day of the visit set the stage for the interaction and exchange of opinions based on the students' observations the previous day. Everyone reaffirmed their understanding of the importance of peace and took part in a signature collection campaign calling for the abolition of nuclear weapons with Nagasaki City high school students.

Tour participant Saroj DHUNGANA (APM 1, Nepal) gave his impressions, "The speeches we heard touched our hearts and made me feel like I am too a victim of this human catastrophe". Tour Leader, Adrian Robin NGO (APM 2, The Philippines) shared his experience of exchange with the high school students, "It's just amazing how someone much younger than yourself can teach us so much".

The high school students who participated in the "10,000 Signatures Campaign" have been invited to APU on July 18th for an on-campus petition with the APU Peace Tour participants. 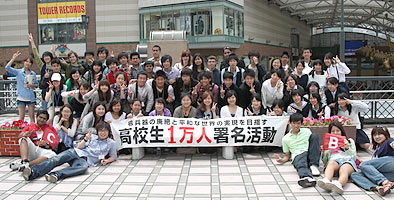