"Multicultural Weeks" are being held again this year on the APU campus. Held over a month, this event will put the spotlight on the 98 countries & regions represented on the APU campus and introduce their different language and cultures. The 3rd installment, "Korean Week", is now underway and will run until Friday 25. 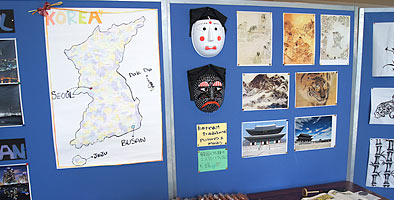 A generous menu of Korean food will be available during Korean Week at the Cafeteria including "Topogi", "Pul-Kogi" and "Chijimi". You will also be able to have your photo taken wearing traditional Korean costumes, create your own Korean hand-mirror, and experience Korean culture. Marking the end of Korean Week is the "Grand Show". Entitled Hunminjeongeum*, the pantomime performance will tell the story of the father of the Hangul alphabet and fourth king of the Joseon Dynasty, Sejong the Great, from the time of his enthronement through to his creation of the Hangul alphabet. The performance is sure to enthrall with a traditional Korean martial arts Tae Kwon Do display, a dazzling fan dance with costumes, a traditional "Samulunori" musical performance by APU circle Shinmyoung, and much, more more.
We hope to see you there!