From Monday, May 17, 2010, seventeen government officials from nine African countries including Angola, Lesotho, Namibia and Swaziland took part in an "African Regional Development-One Village, One Product" training program at APU. Commissioned by the Japan International Cooperation Agency (JICA), the program ran for two weeks until Friday, May 28. 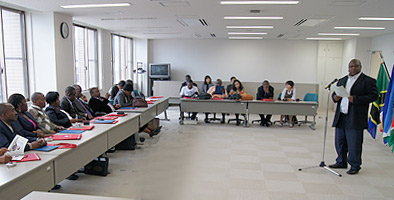 Held under the principles of capacity development, the training program aimed to establish a "One Village, One Product" system to promote regional development throughout African nations. Thanks to the high number of African countries volunteering participants, two training programs were held, the first of which took place earlier in April.

In addition to lectures and discussions of case studies focusing on the theory and evaluation of community capacity development*, the group also took part in discussions and inspections at a number of famous spots around the Prefecture including Oyama-Machi. Furthermore, the group was introduced to the Beppu "Hatto Onpaku" hot spring initiative** and experienced the program first-hand. At the closing ceremony, the group delivered a song they created with lyrics paying tribute to the One Village, One Product initiative.

Mr. OWANA Alphonse, Technical Advisor to the Cameroon Ministry of small and medium-size enterprises, social economy and handicrafts, gave his impressions of the program, "I really feel that the principals of 'One Village, One Product' and 'Hatto Onpaku' offer people living in the rural areas of our nations an effective tool towards regional development. I also strongly feel that the key to success is charismatic leadership and people with ingenuity, vision and the will to see the project through to a successful conclusion".

Since APU began receiving JICA commissions in 2006 the university has welcomed trainees from all over the world. A training program is scheduled for June this year for public officials from a number of Asian countries. 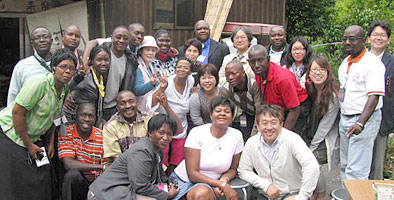