From Friday, July 16 until Friday, July 30, 2010, eight public officials from the Republic of Chile visited APU for a JICA-commissioned training course entitled "Strengthening Rural Administration for the Promotion of Regional Industry in Chile". This is the third time APU has conducted this training course which welcomed high ranking Chilean public officials including a city mayor, lawmakers, rural civil servants, and the chairman of the Tourist Guide Association. 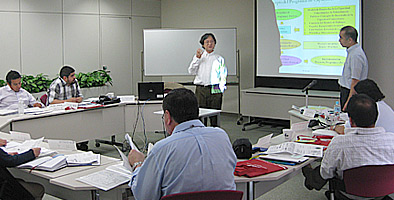 Chile is currently transitioning towards a decentralized government system that gives more power to regional governments. During their time at APU, the trainees learned about Japan's rural development theories and case studies with the aim of applying what they learned to policy making and industry development in Chile.

The focus of this training was how to link rural development theory and practice. Approaching the issue from a range of angles, trainees studied policy implementation strategies and ways to identify and utilize untapped local resources based on methods used by the One Village, One Product (OVOP) movement and Hatto Onpaku.

In addition to attending lectures about "community capacity development" covering theory, evaluation, and case studies, the trainees were also visited a number of sites around Oita Prefecture where regional development initiatives are currently underway. At Oyama-Machi, Hita City, the trainees heard a lecture from the local Agricultural Cooperative and stayed with a Japanese family. They also visited Himeshima, an island village renowned for its tourism initiatives incorporating the island's fishing resources, and also enjoyed cooking some local cuisine. The trainees then visited Soja City, Okayama Prefecture, where they learned about the development of the Hatto Onpaku model in other parts of Japan and saw the "Michikusa Komichi" project first-hand.

APS Professor Miyoshi Koichi played a central role in the training program and was assisted by APU graduate students from Japan, Mexico and Belize who served as group discussion facilitators.

Since being commissioned by JICA in 2006, APU has received JICA trainees from many countries around the world. A similar training program is scheduled for October with public officials from Colombia, Ecuador and Peru coming to APU. 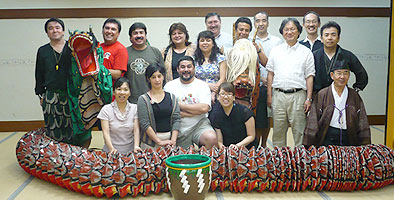