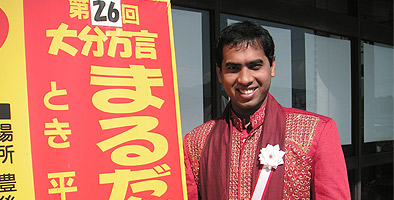 Marking its 26th year, the Oita Dialect Speech Content is a unique, history-rich event in which participants give speeches in Oita dialect. This year there were 14 participants ranging in age from 17 to 72. Continuing from last year, three international students from APU joined the contest. An audience of approximately 1200 turned out for the occasion, some of whom had to stand in the back of the venue. The crowd cheered loudly for the international students who spoke Oita dialect as if they were born and raised in Oita.

In a speech entitled "What Do You Believe In?", HOSSAIN Imam discussed Japan's religious outlook in comparison with that of his home country of Bangladesh, where most of the population is Muslim.

HOSSAIN reflected on the event by saying: "I participated without having much time to practice or any confidence in my ability. The venue was packed and I began my speech nervously, but when I heard people laughing as they listened to my speech, I calmed down. By the end, I was so relaxed I felt like I was talking to a good friend. Practicing Oita Dialect was like learning a different language from Japanese, but I was very pleased to win the Judges' Prize and I feel confident that I can do anything if I put my mind to it."

HOSSAIN has also been invited to deliver his speech at the November 27 "DaiRyoku-Taikai in Daikoji Shrine" in Kunimi Town, Kunisaki City. Held at the Daikoji Shrine, this event is part of the 12th Oita Prefectural Culture Festival Regional Cultural Events. We hope to see you there. 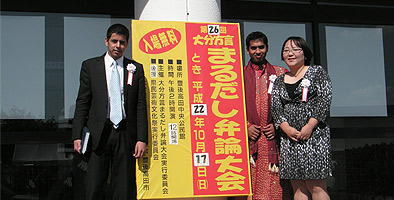