On Saturday, December 11, 2010, the Asia Pacific University Presidents' Peace Forum was held by the Ritsumeikan Academy in the sprit of the Ritsumeikan Charter to promote the "eradication nuclear weapons" and "the creation of a peaceful society". Held as part of the celebrations to commemorate the 140th Anniversary of The Ritsumeikan Academy, the 110th Anniversary of Ritsumeikan University, and the 10th Anniversary of APU, this event brought together leaders of nine universities from around the world to discuss the kind of role universities should aim to play in the creation of a peaceful world. In addition to APU President KORENAGA Shun, a total of thirty-four APU students attended this forum. 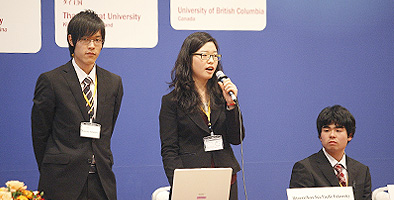 Under the theme of "The role of universities in the creation of a peaceful Asia-Pacific region", former United Nations Undersecretary-General and member of the APU Advisory Committee, Mr. AKASHI Yasushi, delivered the keynote speech. Drawing on the speeches of US President OBAMA, Mr. AKASHI made a call for Japan, as a peaceful nation, to "take measures the world can be proud of". This was followed by Chancellor of the Ritsumeikan Trust, KAWAGUCHI Kiyofumi, who stated that "through the development of graduates with the skills to tackle the many global problems facing contemporary international society, we hope to contribute to the development of the Asia Pacific region".

Representatives of each of the participating nine universities then introduced their respective international education and human resource development programs before announcing a joint communiqué towards further development of student exchange: "We endorse initiatives towards the eradication of nuclear weapons from international society and will contribute to world peace and sustainable development".

A panel discussion then took place under the theme of "Peace and Sustainable Development in the Asia Pacific Region", which soon developed into a lively debate and provided students the opportunity to raise questions to the panel of university leaders. APU students RAI Sharad Chandra (APS4, Nepal) and TAMURA Joichi (APM3, Japan) then delivered a presentation under the theme of "Problems with security assurance in the Asia-Pacific". YAMAMURA Kazutoku (APS4, Japan) and KIM Hanna (APS4, Korea) then introduced the peace and volunteer initiatives in Thailand of the student NGO "Prengo". The presentations were well received by the 200-strong audience that listened keenly to what the speakers had to say.

One of the presenting students, Mr. TAMURA, also presented the findings his research under the title of "Security of a person tossed around by National Security". He commented on the experience: "being able to get feedback from university presidents at the end of my presentation is a great motivation for me in my further studies. By attending this forum, I could feel how everyone involved was working towards our mutual goal of 'peace'. I also realized that each and every one of us has the ability to contribute to peace. I hope that I can also play a role in the process".

On the following day, Sunday 12, APU students attended a lecture by Honorary Director of the Ritsumeikan University Kyoto Museum for World Peace, Mr. ANZAI Ikuro. This was followed by discussions with high students taking part in the Nagasaki Peace Forum and a tour of the Ritsumeikan campus by student guides.

Please click here for more information on the joint communiqué 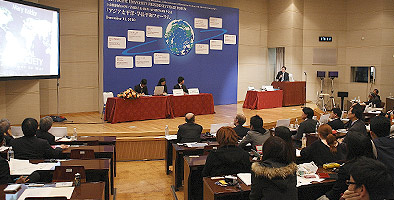