In September 2005, 17 members of Wadaiko "Raku" an official student club of APU visited and performed Japanese drum concerts in Mongolia, a country known for its endless and beautiful plains. Two Korean, 1 Mongolian and 14 Japanese students of the above club gathered together under the strong desire of the Mongolian members to "Let the people in Mongolia have the chance to hear the thrilling sound of Japanese drums and let the friends of APU see the beauty of the Mongolian country". 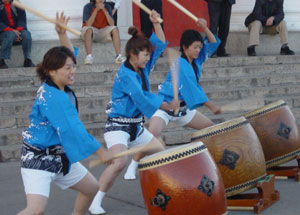 Wadaiko "Raku" has performed overseas before, but this time everything from negotiating and contacting the Mongolian side to deciding on the program and means of transports were all organized by the club themselves. It was through the support and help of many people that they were able to transport Japanese drums by ferry and trains to faraway Mongolia, crossing the deep blue sea and the territories of China, to move the hearts of thousands of people.

In Mongolia, the "Raku" club held a total of 6 concerts at venues such as the University of Science and Technology, Ulaanbaatar Orphanage and even at a lecture about Japanese culture by Mr. Ei Rokusuke, a famous personality in Japan. "We were first very worried about how the Mongolian people would respond to our concerts, but from the moment we held our first concert, all the nervousness was gone in a flash. The applause from the audience was beyond our expectations and imagination" said one of the members. Certainly without using words, they must have found a common language with the local people through the sounds of the drums. Apart from the concerts, the group also held APU information sessions at the University of Science and Technology and Ulaanbaatar Erdem University, and were able to ignite the fire of desire to study at APU among many young minds.

After the program was over in the capital city of Ulaanbaatar the 17 members headed to the countryside of endless steppes. One drummer said, "It was a sight we dreamt of seeing." Another commented that, "The further we traveled from the city, the lower the sky would become. It felt like we could jump and grab a piece of a cloud." Another student said, "The horses grazed freely and it felt like time didn't exist there." In such a remote place, stood a Rehabilitation Center called "Tahilt" for handicapped people, built with the support of the ODA of Japan. There were even people in wheelchairs who had came from the city and locals who had walked several kilometers in order to listen to their performance. 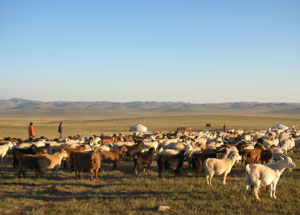 With cows grazing in the background, "Raku" held its last performance in Mongolia under a clear blue sky. The rolling sound of Japanese drums echoed all over the countryside and reached the farthest horizons beyond sight. The sounds of the ocean, wind, Japanese festivals, the hot springs of Beppu, the joy of playing drums, and most of all the hopes and desires of the 17 young people, were conveyed to the people listening and to each and every living organism in the area. Throughout this tour, we strongly felt how lucky we were to encounter Japanese drums and the people we play with, without whom this tour would not have come true. Through Wadaiko we were able to show a part of Japanese culture and learn about Mongolian culture in return. 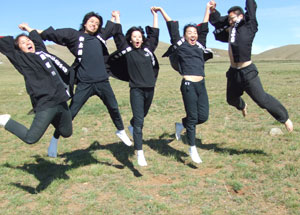 With this successful story under our belt, we are currently in collaboration with our sister club, Mai "Raku" in planning a 2nd Raku concert to be held in the APU Millennium Hall on February 4, 2006. This concert is being held in thanks to the people and organizations that show us support. Come and hear us play! Let us move your hearts and become one in the beat of Taiko!