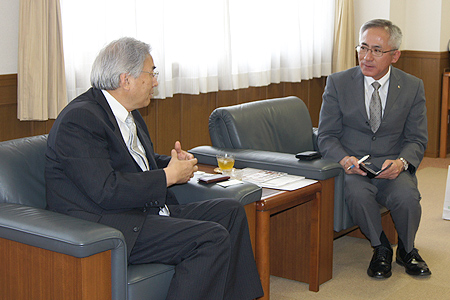 President YUSHITA previously spent one year at APU from autumn 2008 and stayed at AP House while studying at the College of International Management and the Graduate School of Management. This was his first visit to APU since completing his training in 2009. At that time, President YUSHITA was the Managing Executive Officer of the company however he assumed his current post in June this year.

Presidents YUSHITA and KORENAGA enjoyed a discussion about current trends in ship-building and navy projects, and President YUSHITA also reflected about his experiences and campus life at APU. He also spoke of how these experiences are being put to good use in his current job, “I often find that by expanding on the classes I took, the textbooks I read and the reports I wrote at APU provides me new hints about how to go about my current job”.

At the conclusion of their discussion, President YUSHITA met with some of his former teachers including the Dean of the College of International Management, YOKOYAMA Kenji, Professor Emeritus NAMBA Masanori, and Professor FUKUTANI Masanobu. He also took the opportunity to visit his former residence – AP House, meet with some of his old dormitory friends and reminisce about his time here. Dean YOKOYAMA praised President YUSHITA on his promotion and described him as “APU’s first graduate to become the head of a company listed on the First Section of the Tokyo Stock Exchange”.

*The Advisory Committee
Established before the university opened, the Advisory Committee aims to provide multifaceted support to the University and currently has 323 members (as of January 1, 2011) including former heads of state, ambassadors, and leading figures in the Japanese business and economic circles. The Committee continues to support the further development and enrichment of study and research at APU. 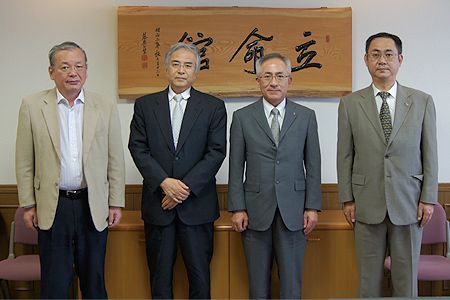