On Friday, July 15, 2011, a memorandum was concluded between APU and the Organizing Committee (IAGOC) of the 2014 Asian Games scheduled to be held in Incheon, South Korea. The signing ceremony was attended by APU Vice-President, YAMAGAMI Susumu, and Dr. KWON Kyung-sang, the current President of the IAGOC and former APU Visiting Professor in AY2005 (the memorandum was signed in advance by APU President KORENAGA Shun who was absent from the ceremony on official duties). Through this memorandum, the two parties promise to develop a cooperative relationship and work together towards the Incheon 2014 Asian Games. 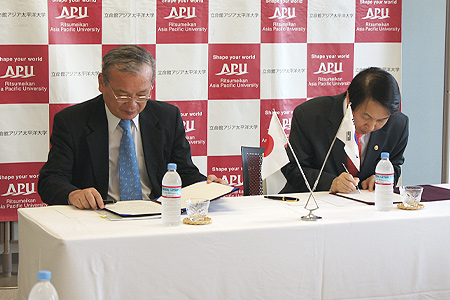 Commonly referred to as the “Asian Olympics”, the concept of the Asian Games was first advocated by India at the end of the Second World War as a multi-sport event and has been hosted by the Asian Olympic Committee since 1982. The 2014 games will be hosted by Incheon, Korea, from September 19 until October 4.

IAGOC President KWON Kyung-sang, addressed the group and said, “APU is home to a large number of students from Korea and around Asia, and I am sure that the University can play an active role in the upcoming games. I hope to draw on the support of APU students leading up the games including language support and volunteer projects”. In response Vice-President YAMAGAMI said, “Our students have shown a great interest in supporting the athletes from around Asia. We look forward to fleshing out the details and lending our support to the games”.

Following the ceremony, representatives of the IAGOC enjoyed a discussion with APU students who took the opportunity to ask questions about the kind of support that they can provide. 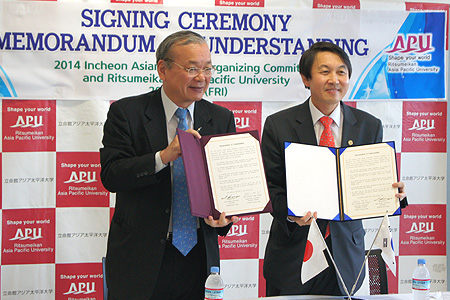