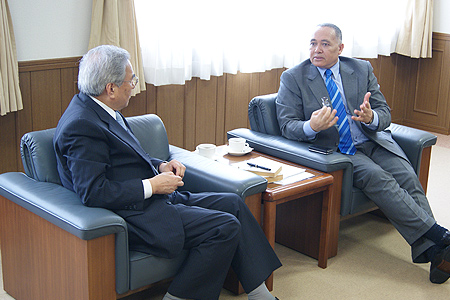 During his time at APU, the Ambassador enjoyed a tour of the campus and lunch at the APU cafeteria before meeting with the aforementioned members of the APU executive. During their discussion, the group touched on a range of subjects including the colonial past of Lesotho, foreign aid, and foreign assistance in infrastructure projects.

APU currently has no students from Lesotho but is keen to attract more students in the future. With this in mind, Vice-President MANI briefly described some of the features of the APU educational and admissions systems including the English/Japanese dual-language syllabus, transfer study opportunities and tuition reduction scholarships. In response, the Ambassador expressed his hope that more Lesotho students will be studying at APU in the near future.

At the conclusion of the discussion, President KORENAGA and the Ambassador exchanged gifts of a Japanese fan and a traditional Lesotho wall hanging.

APU continues to enjoy a cordial relationship with the Kingdom of Lesotho culminating in a visits by the former Ambassador Mr. Mokhele LIKATE in September, 2010, and Lesotho officials as part of the JICA-commissioned “African Regional Development-One Village, One Product” training program in May, 2010. 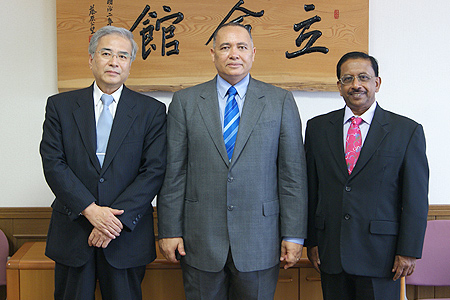