On Thursday, October 27th, 2011, Ambassador Ken SHIMANOUCHI, former Ambassador Extraordinary and Plenipotentiary of Japan to Brazil, visited APU to deliver a special lecture based on his career and experiences as a diplomat. This session was held as a part of the “International Organizations EA” course (instructor: APS Professor FUJIMURA Kazuhiro). 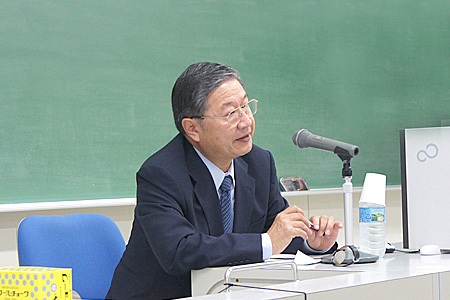 Before beginning his lecture, Ambassador SHIMANOUCHI noted that serving as a diplomat has the added benefit of being able to watch history as it unfolds. He then shared with the audience in the classroom his own experiences and views on important historical events that took place during his foreign service years.

First, he explained to the APU students what the political scenery was like in Japan during the 1960’s and 70’s. He stated, “Although Japan’s domestic situation was precarious in the wake of the conclusion of the revised Japan-US Security Treaty and the divided public opinion around this issue, there was an overall "upbeat outlook" toward the future.

He then focused on his years as a young diplomat posted in Washington D.C. (1983- 86) and spoke about the friendly relations between the then-Prime Minister of Japan, Yasuhiro Nakasone, and former US President, Ronald Reagan. In this respect he stressed that he then felt that U.S.-Japan security relationship had started to evolve into a true alliance.

Lastly, Ambassador SHIMANOUCHI talked about his experiences as Japanese Ambassador to Brazil and underscored this South American country’s importance as one of the most dynamic emerging economies in today’s world which are seeing a major power shifts now underway.

Before closing the session, Mr. SHIMANOUCHI offered his advice to the APU students based on his career of the foreign service in encouraging them to continue their learning. 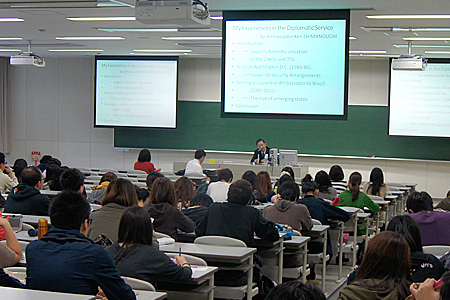