On Tuesday, November 9, 2011, Mr. Radek TYSZKIEWICZ, First Secretary, Embassy of the Republic of Poland to Japan visited APU and gave a lecture to an audience of APU students about Poland, its recent situation, and its relationships with other European countries and Japan. 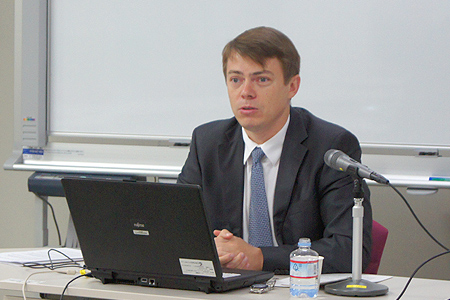 During his lecture, Mr. TYSZKIEWICZ first introduced the characteristics of Poland, its geography, history, and famous food and people, followed by a discussion about Poland’s economic situation. Mr. TYSZKIEWICZ stated that Poland's economy is growing in a slow but stable way despite the ongoing European economic crisis. For this reason, he suggested, Poland is one of the most attractive places in Europe for foreign investors.

Mr. TYSZKIEWICZ then spoke about the activities that the Polish Embassy conducted in response of the March 11 Tohoku Earthquake and discussed Poland’s ongoing initiatives during its Presidency of the Council of the European Union. Poland’s goals, the First Secretary suggested, are to have a “safe and secure Europe” with a stable energy source, food supplies and also to open Europe up for further economic trade and agreements. The First Secretary also spoke about current projects to promote Poland tourism such as the upcoming 2012 UEFA European Football Championship that will be jointly hosted by Poland and Ukraine.

A question and answer session followed the lecture headed by Dean Kenji YOKOYAMA. Students in the audience raised a number of questions such as “Why did Poland chose not to adapt the Euro currency?”, “How will Poland promote tourism in Japan?”

At the conclusion of the lecture, the First Secretary kindly stayed behind for a few minutes and discussed the issues further with APU students. 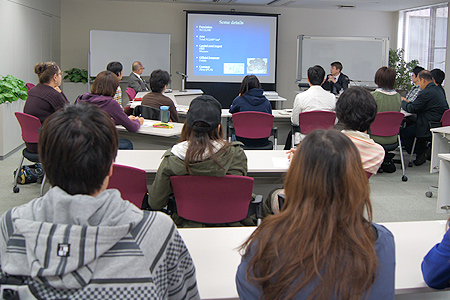