On Wednesday, November 9, 2011, a group of prominent international journalists stationed in Japan visited APU and took part in a panel discussion and open talk session with APU students. Chaired by Vice-President YAMAGAMAI, the panel discussed a range of issues surrounding how foreign journalists view Japanese politics, economics, the media, contemporary society and much more. 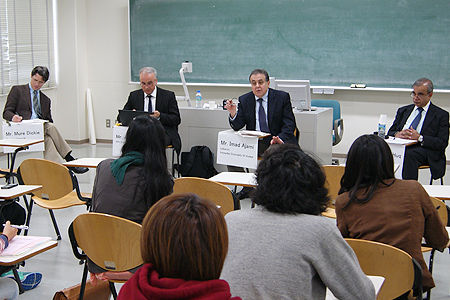 The discussions soon unfolded into a lively debate surrounding the maintenance of traditional culture in Japan compared with China and Korea, and also the differing historical perceptions held of Japan as an “aggressor” and “victim” during WW2 including Monzurul Huq (Prothom Alo, Bangladesh) who described how Japan is often perceived in Bangladesh, and in South Asia as a whole, as a country that was sympathetic to the cause of their liberation from European colonial subjugation.  Joel Legendre-Koizumi (RTL, France) drew on the example of how France, Germany and the UK called a halt to centuries of war and antagonism to build a united European community: “Don’t keep looking at the historical differences between your countries. You are the future of this region and you have the power to build a brighter tomorrow for Asia”.

Also discussed was the global media response to the Tohoku earthquake, tsunami and resulting nuclear crisis at the Fukushima Daiichi power plant. Mure Dickie (Financial Times, UK) who travelled extensively throughout the Tohoku Region immediately following the disaster, suggested that the nuclear crisis was a test of how the news is reported - in some of the less scrupulous media it was treated sensationally almost as a source of entertainment whereas others seemed more focused on avoiding panic . “I encourage you to be a critical reader of the news and don’t rely on just one source”. Joel Legendre-Koizumi (RTL, France) also commented on the Fukushima Daiichi power plant crisis and stated that “it is the symbol of lack of accountability and transparency of a government as witnessed abroad and that it therefore requires a shift to a stronger form of government”.

Dr. Imad Ajami (Iris Globe, Lebanon) encouraged the young generation to “reestablish the ‘power’ and vitality that Japan had in previous generations” and work towards rebuilding the country. Dr. Imad Ajami also commented on the role of the media and the young generation of the global village, “The world has become a small village in which the media plays a very important role. But if the media is not used in the right way, it can become a very destructive weapon; it can become a factor of division. People belonging to the same national and linguistic group tend to differ compared to their previous generations. By contrast, your generation seems to be more united than previous ones despite being from many different nations and tongues. We can see this taking place at APU where students from more than 80 different countries and regions are living together on the same campus dreaming together of a better future”.

The symposium proved to be a great opportunity for APU students to get a glimpse into the world of international journalism and the dynamic nature of perceptions towards Japan and the media.

NB: the opinions expressed in this article do not necessarily represent the views of APU 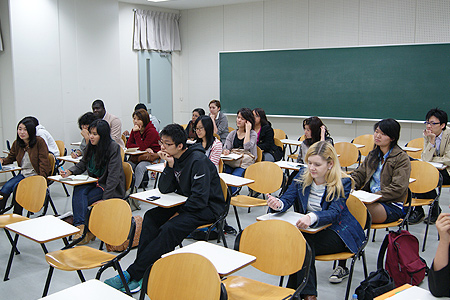