On Monday, December 12, 2011, Mr. KONDO Nobuyuki, seasoned water purification engineer and CEO of NYK Inc., visited APU to deliver a workshop about a water purification technique he developed. The workshop was held under the facilitation of Prof. TSUKADA Shunso and primarily designed for demonstrating how his flocculation technique to be utilized for the purification of muddy/contaminated waters in low lying areas or swamps. This technique has also been tested and found to be effective for the desalination of submerged rice paddies and elimination of caesium from farming land. A lot has been discussed on the help to be extended to Tohoku Region, but little has been shown on specific measures to be used for the recovery from the East Japan earthquake disaster.

Mr. KONDO first explained his research and the experiments he conducted to prove the effectiveness of his technique. The traditional water purifying method consists of a lengthy 3-part treatment process of filtering organic substance, separating mud and treating the wet mud. However, with Mr. KONDO’s technique these steps are almost simultaneous as the 2 flocculent agents charged with negative and positive ions create weight and sink the pollutants to the bottom of the container. 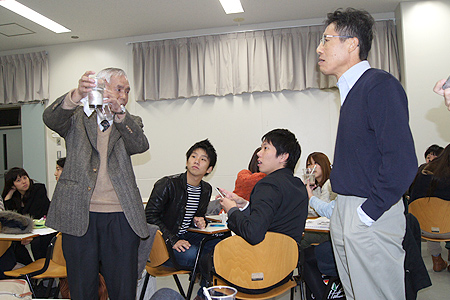 During the workshop, participants got to experience the water purifying technique first hand with a small in-class experiment. The students first added a mixture of dirt and algae to a cup of clean water. Following Mr. KONDO’s instructions and adding the 2 flocculent agents, the students were amazed at how the water regained its original state.

After the experiment, Mr. KONDO further explained the merits and possible applications of the method. Due to flocculants’ environmentally safe nature, it can be used in lakes, rivers, and farm lands, and it has also proven effective in treating toxic chemicals from industrial waste and also radioactive waste from nuclear plants. Mr. KONDO stressed that the applications for this purifying method are truly infinite as it can also extract nutritious chemicals from water such as nitrogen which can then be used as a fertilizer.

Given the practical nature of this workshop, it was participated not only by students but also by members of PRENGO, HABITAT APU and other etra-curriculum activities groups which have been actively engaged in voluntary/community activities in Asia and Japan.

At the end of the workshop, Mr. KONDO encouraged the students to use his purifying method in various volunteer activities, whether it be cleaning farm land water in Thailand or volunteering in aid efforts in the Fukushima disaster area. 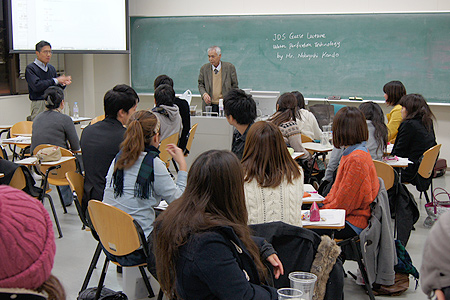