Since November last year, the trainees spent approximately two months at AP House and worked on developing their English proficiency and communication skills. Studying at the College of International Management, the trainees took papers focusing on international management and marketing.

During the ceremony the trainees shared some of the results of their two months spent at APU and the skills and experiences they gained. A number of students the trainees befriended during their stay at AP House also attended the ceremony and listed intently to what the trainees had to say. One student commented that “I am very thankful to the trainees for sharing with us their experiences of working life and giving us some advice about business Japanese”.

APU Vice-President, HIRATA Junichi, gave a short speech and presented each trainee with their certificate of completion. He commented that, “The classes you took at APU and the time you spent living alongside international students at AP House have given you valuable insights into the future of Japanese industry including business development and the hiring of foreign employees. I hope that you put these insights into practice”.

In addition to Sony Corporation, APU has also welcomed trainees from Toho Titanium, Sasebo Heavy Industries, Nippon Light Metals, and more, into our undergraduate and graduate programs. Through these training programs, we aim to provide businessmen and women the opportunity to further their education and help them to make their next career step. 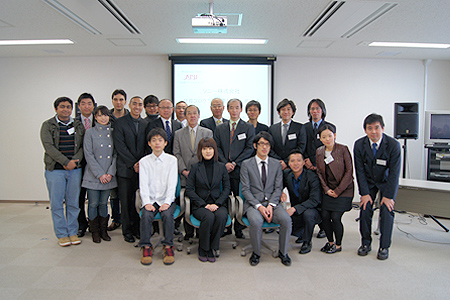