On Friday, April 13, 2012, Minister Plenipotentiary, Deputy Head of Mission and Economic Cluster Coordinator at the Embassy of the Kingdom of the Netherlands, H.E Nienke TROOSTER, visited APU and met with President KORENAGA, Vice-President HOMMA and a group of APU students. 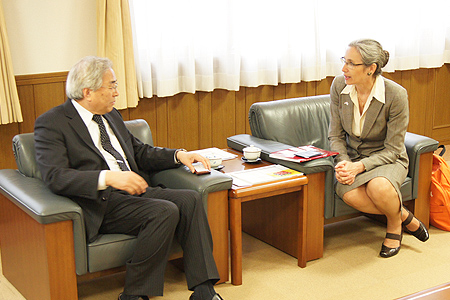 During the discussion, President KORENAGA described the courses available at APU and briefly explained the 50-50 domestic/international student and faculty body. Minister TROOSTER commented that “Even by international standards, APU is unique in terms of its international student body. It’s great to see that this kind of university exists and it’s important that countries can prepare people for the age of globalization”. In response, Vice-President HOMMA stated that, “We saw the need for a university that could deal with globalisation back in the 1990’s. Although there are over 700 universities in Japan, only a handful, including APU, are truly serious about internationalisation”.

Minister TROOSTER also raised questions about international student and faculty recruitment, the role of the APU Alumni Association and APU’s involvement in the local community. At the end of their discussion, Minister TROOSTER presented President KORENAGA with two books about the 400-year-old history between Japan and the Netherlands.

Minister TROOSTER also met with a group of APU students to discuss student and academic life at APU and enjoyed a tour of the university campus.

APU currently has one student from the Netherlands and has concluded exchange agreements with two Dutch tertiary institutions. 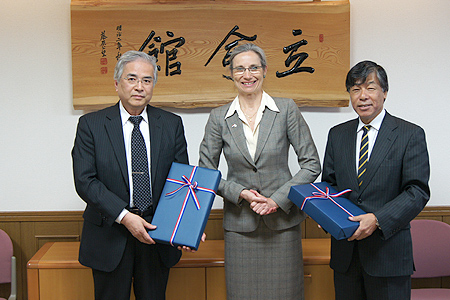