On Wednesday, April 11, 2012, APU and the Ministry of Education and Sports of the Lao People’s Democratic Republic concluded a memorandum on a newly established scholarship as part of a Lao government program to improve higher education in that country. Visiting APU from Laos for the ceremony were Dr. Phonephet Boupha, the Director General of the Department of Higher Education at the Lao Ministry of Education and Sports, and Presidents from three Lao national/municipal universities. 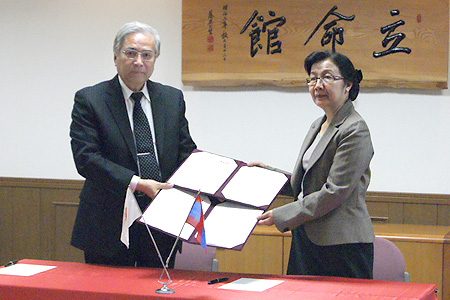 From September 2012 onward, the Lao Government will be dispatching faculty members and government officers to affiliated overseas graduate schools in order to get master or doctoral degrees as part of their “Higher Education Enrichment Project”. This three-year project is financially supported by the Asian Development Bank (ADB). The signing of this memorandum was enabled since APU was selected as one of the partner universities for the project.

Director General Boupha and the presidents of the Lao universities were briefed by President KORENAGA, Vice-President HOMMA and members of the APU executive on Japanese private university management and also enjoyed a tour of the APU Library, Media Center and AP House guided by APU students.

With the signing of this memorandum, APU will now play a major role in supporting the enrichment and improvement of higher education in Laos through accepting five scholarship recipients a year for the next three years. 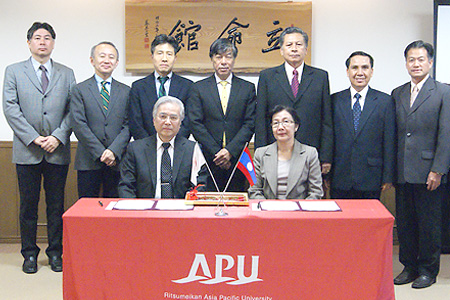