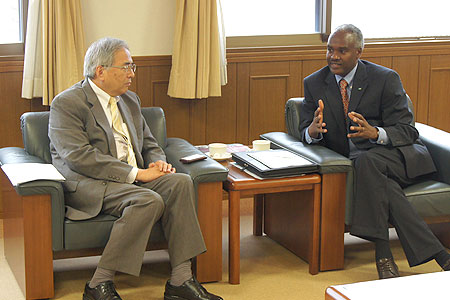 During the discussions, Ambassador MURIGANDE expressed his wish to explore opportunities for Rwandan students to study in Japanese universities: “Since the end of the civil war in 1994, we have seen a rapid expansion in our tertiary education sector which has increased our demand for highly qualified lecturers with master’s and PhD. qualifications. I hope that APU can play a role in the development of our students, universities and institutes in Rwanda”.

In response, Pro Vice-President PORTER introduced some of the features of APU including the scholarship opportunities and the English language-basis curriculum. The group then discussed the recent history of Rwanda following the civil war and 1994 genocide that claimed the lives of approximately 1 million Rwandans and devastated the country’s economy. Since then, the Ambassador remarked, “Our nation has been able to come together as one people and share a common goal for our country’s future. We can look forward to many years of peace and stability”.

Following the discussion, Ambassador MURIGANDE then met with a group of APU students who raised a number of questions about Rwanda including regional integration, economic growth and governance.

Ambassador MURIGANDE is an Ambassador Member of the APU Advisory Committee and, following a career in research and academia, has held a number of high-level portfolios in the Rwandan government including Foreign Affairs, Government Affairs, and Education. 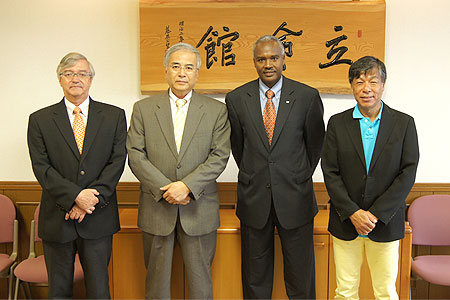