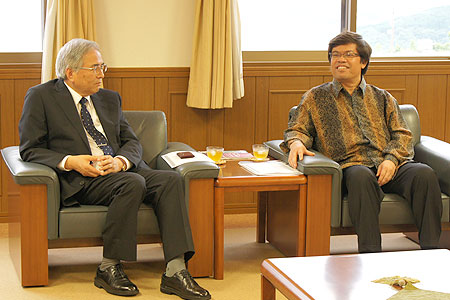 During his meeting with President KORENAGA, Deputy Chief of Mission, Jonny SINAGA, commented that: “Our students of today will be the future leaders of Indonesia tomorrow. I thank you for contributing to the development of our Indonesian students”.

Earlier on the same day, Mr. Sabam Siagian visited APU and delivered a special lecture. Sabam Siagian is the Senior Editor of the Jakarta Post – Indonesia’s largest English language newspaper – and the former Ambassador of Indonesia to Australia. During his visit to APU he also met with President KORENAGA and members of the APU executive and faculty.

During his discussion with President KORENAGA Shun, Sabam Siagian, a former correspondent that covered the final days of the Vietnam War, spoke about the China-USA power balance in the Asia Pacific region and the ongoing South China Sea territorial dispute. President KORENAGA said, “As the 15 century was known as the age of exploration, so too will the 21st century will be the ‘age of negotiation’. Conflicts in our age should be dealt with through peaceful negotiations”. In response, Sabam Siagian said, “We need to prepare the younger generations and equip them with the skills and moral judgment to engage in the problems facing the region and contribute to a stable and prosperous future for the Asia Pacific Region”.

Sabam Siagian then delivered a special lecture about Indonesia’s contribution to regional security in South East Asia under the title of “Indonesia’s Future and the Security of the Asia Pacific Region” to an audience of APU students and faculty.

The Indonesian delegation attended the Indonesian Week Grand Show and enjoyed an evening of impressive performances showcasing the colourful traditional music and arts of Indonesia. 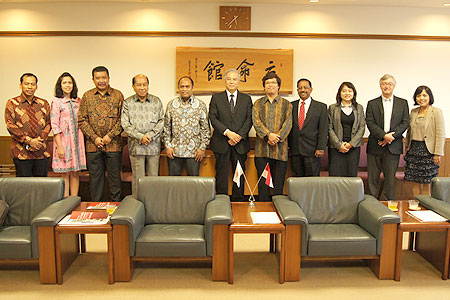