APU has been adopted into the Japanese Ministry of Education, Culture, Sports, Science and Technology (MEXT) AY2012 Project for the Promotion of Global Human Resource Development - Type A. 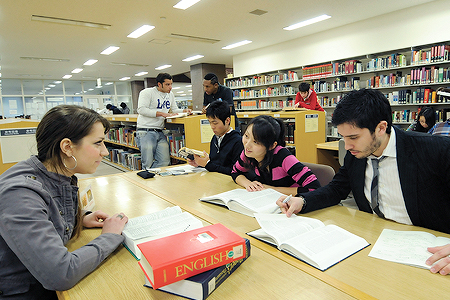 Launched in 2012, this project was established with the aim of changing the perceived inward-looking orientation of Japan’s college students, raising the international competitiveness of Japanese industries, and the promotion of greater ties between nations. This project provides targeted government financial aid to projects engaged in the promotion of university education globalization towards nurturing globally-minded graduates. Type A (full university involvement) is open to initiatives that aim to achieve the above outcomes through the involvement of the entire university, and requires projects put forward by applicant universities, as leading Japanese globalizing institutions, to also contribute to the globalization of fellow universities.

A total of 152 submissions were made by 129 universities throughout Japan. Forty-one applications were accepted in Type A, including APU.

Details of APU’s Project for the Promotion of Global Human Resource Development application are as follows.

Since its establishment, APU has built up a wealth of educational knowhow as an international university that has been applied to our human resource promotion initiatives. The University has also made use of its global networks and international and multicultural environment, and actively adopted leading international educational methods and standards as part of its ongoing efforts to strengthen its programs to nurture Japanese students into globally-minded graduates with the skills needed to take their place on the global stage. As a center that can also contribute to the creation of globally-minded human resources for the entire nation, information about APU’s forward-looking programs is shared with universities throughout Japan.

Program features:
Utilize the APU multicultural environment to encourage greater interaction and learning between Japanese and international students.
Strengthen the nurturing of globally-minded graduates at every step during students’ university experience including pre and post-enrollment education and student life, and graduation and career development.
Advance the evaluation and measurement of student learning outcomes and university educational impact.

Related link: Notes from the President & Vice-Presidents – Project for the Promotion of Global Human Resource Development

A list of previously adopted APU initiatives can be viewed here.
Information Disclosure: List of APU Academic Programs selected and financially supported by MEXT as “Good Practice” (GP) and other awards