On Thursday, September 27, 2012, economist, Member of the Portuguese Parliament and Former Secretary of State for Treasury and Finance, Miguel FRASQUILHO visited APU and delivered an RCAPS lecture about the current state of the Portuguese economy. 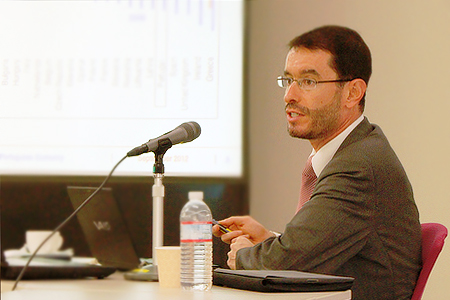 Ahead of the lecture, Mr. FRASQUILHO met with APU Vice-President HONMA Masao and Pro Vice-President Edgar PORTER. During their meeting they discussed a range of issues including the APU curriculum and the university’s impact on the local community, and the current Euro zone crisis. Although APU currently has no students from Portugal, Mr. FRASQUILHO expressed his hope that “this will change in the near future. It’s important that we get more Portuguese students studying abroad and experiencing different cultures”.

During his lecture, Mr. FRASQUILHO spoke about the adjustment process of the Portuguese economy following the EUR 78 billion loan bailout from the Troika (the European Central Bank (EBC), European Commission, and the IMF). He described in detail the causes of the crisis in Portugal including structural problems in the economy, excessive public debt, and a lack of a unified fiscal framework across the Euro zone. Following an “inevitable” process of often painful austerity and adjustments for the Portuguese people, Mr. FRASQUILHO gave a positive outlook for his country: “the bailout program has already been subject to five regular quarterly assessments, which were all positive. Despite the existing risks, which cannot be ignored, this has allowed the country to gradually regain the confidence of investors and the international community”.

Following his presentation, Mr. FRASQUILHO opened the floor to questions from the audience about labor and tax system reforms, the role of the ECB, rising Portuguese exports, and more. The lecture was well received by the audience of APU students, faculty and staff.

Following the lecture, Mr. FRASQUILHO enjoyed a tour of the APU campus. APU currently has an exchange agreement with the ISCTE Business School, Lisbon University Institute. 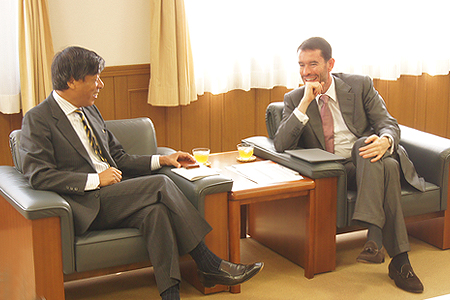