On December 16, 2005, the 2nd "Lasting Light" festival was held by the APU circle "Lasting Light Executive Committee."
The first event was held in December, 2004 organized by 1st year students with the cooperation of the Usuki City Bamboo Festival Executive Committee. As part of the Lasting Light Festival the APU campus was lit-up at night with heart shaped candles, floating candles in the fountain and approximately 1,000 candles that were encased in colored bamboo. All the candles around the performance stage were for a different event staged earlier in the day. With over 4,000 candles burning bright the campus had a beautiful dreamy-like atmosphere. 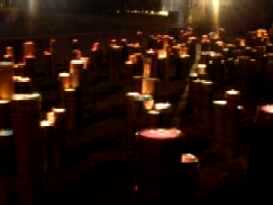 The Executive Committee Members chose the strong and versatile bamboo to hold the candles to convey the "strength" of the APU body. By staging "Lasting Light" they hoped that the APU Spirit would be passed onto juniors at APU.

Despite the poor weather, many visitors came to enjoy the atmosphere and amazing night view from APU.