APU graduate student (March, 2004 APS graduate), Ms. Yuko SATO, will participate in the Beijing International Marathon which will be held on Sunday, October 15th, 2006.Ms. Sato, who entered APU as a freshman student during the University's inaugural year, was active for four years in the Women's Athletic Team during her undergraduate studies.

After graduating from the University, she continues to practice a great deal while belonging to her business group's athletic team. Her achievements include coming in third place in the Oume Marathon, winning the Sydney Gold Coast Half Marathon, and receiving an invitation to participate in the Boston Marathon. 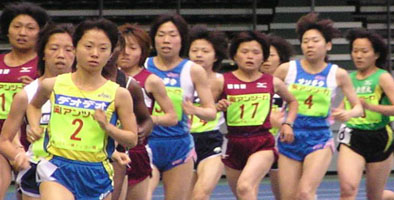 The Beijing International Marathon is scheduled to be broadcast from 10:00 on Sunday, October 15th on TBS/BS-i. Everyone, show your support by tuning in and cheering her on!