A Signing Ceremony for an agreement to establish the Confucius Institute at Ritsumeikan Asia Pacific University was held at the APU Convention Hall on Wednesday,October 25, 2006. Through the collaboration of APU and China's National Office for Teaching Chinese as a Foreign Language (NOCFL), the "APU Confucius Institute" is expected to be completed in April 2007. It will be a first for Kyushu.The Signing Ceremony commenced with greetings by APU Vice President, HAYASHI Kentaro and Vice Minister, LI Weihong from the Ministry of Education of The People's Republic of China. This was followed by a confirmation of the significance of creating the Confucius Institute at APU - a University that welcomes international students from 74 countries and regions around the world. Vice Minister Li then spoke on how appreciative she was of the warm reception that students from her country have received at APU. She also expressed how she hopes the educational ties between China and Japan will continue to grow from strength to strength.

With the establishment of the APU Confucius Institute, Chinese language classes will be offered and lectures held for a public audience. It is hoped that through various initiatives (projects and resources on hand) people will become more familiar with Chinese traditions and art. 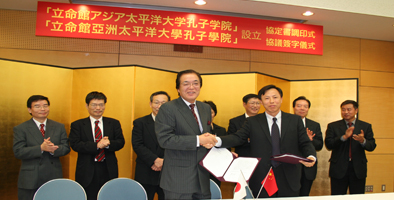