From December 2006, APU welcomed two interns as part of Oita Prefecture's Technical Cultural Trainees Aid Program. During their 3 month internship the participants, Ms. MURAKAMI Claudia from Brazil, and Mr. Elias Maciel Nunez from Honduras worked closely with administrative staff and contributed to APU's student recruitment activities.
The 3 months has gone by in a flash, and the two will soon be heading back to their home countries. On Friday March 2 the interns were accompanied by APU's International Affairs Director, ASONUMA Kazunari for a visit to the Oita Prefectural Government. There they met with Director General SATO Yoichi of the Planning Promotion Department and reported their accomplishments on the program.

Ms. Murakami, a 3rd generation Japanese-Brazilian whose grandparents are originally from Oita Prefecture, expressed her delight at being given the opportunity to work here as an intern. Mr. Nunez meanwhile expressed his determination to leave a good impression as the program's first participant from Honduras.

We wish them all the best in the future, and look forward to the contribution they will make as a bridge connecting APU and Oita Prefecture to their home countries. 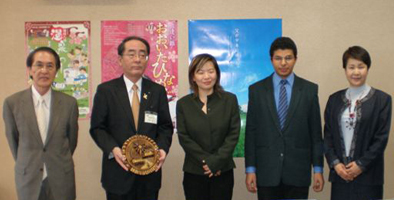