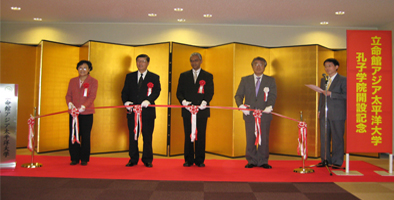 In a short address, APU President Cassim said, "It will give me great pleasure if Chinese culture is spread around campus and the depth, merriment and delightfulness of China is fostered in young people both inside and outside of Japan. Forging a cooperative relationship and fostering an understanding of China's diversity is important for Japan and the rest of the world. With the cooperation of Zhejiang University and the Chinese student population at APU, I promise to make this Confucius Institute at Ritsumeikan Asia Pacific University a centre of excellence.

In this speech, Mr. WU Yapeng stated "The Confucius Institute which is named after the world famous Chinese philosopher has in a very short period of time been established in all corners of the globe. At APU, where eastern and western cultures exist in harmony, the institute will play an important role in the promotion of exchange between cultures, in particular those of Japan and China".

The Confucius Institute is part of a Chinese Government initiative to promote the study of Chinese language and culture, to deepen friendship and to facilitate world peace and development. As of February, 2007, there were 133 Confucius Institutes located in 52 different countries and regions around the world.

The Confucius Institute at APU is currently planning a wide range of events, including public Chinese language classes and cultural lectures, training for Chinese language teachers, holding of Chinese language proficiency tests, support for student-exchanges to China, as well as public access to the library.