The Spring Semester has commenced with refreshed students diligently carrying out their studies. The extra-curricular activity scene has come back to life with new students signing up to take part.Two events organised by APU student circles will take place during Golden Week. Please refer below for details. 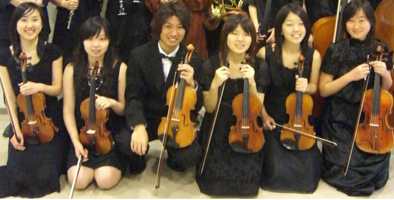 From 2 o'clock on April 29th (Sun) the Ritsumeikan Asia Pacific University Symphony Orchestra (APUSO) will hold its second concert in its ongoing series of performances.

The orchestra was formed in October 2005. Their 1st concert was held in April 2006 and was warmly received by the audience filling APU's Millennium Hall.

The Ritsumeikan Asia Pacific University Symphony Orchestra aims to contribute to the development of music culture in Beppu City, Oita Prefecture and within the Asia Pacific region. Prof. FUKUDA Takashi, who has been working hard to foster music culture in Kyushu and develop the student orchestra, will conduct on the day. The students are working hard to produce the kind of sound that reflects the continued development of the club.

The APU Symphony Orchestra will be joined by guest musicians from Oita Prefecture for their performance of "Hansel and Gretel" (from the Opera of the same name), Jean Sibelius's "Karelia Suite" and Beethoven's "Symphony No. 7". The entrance fee is 500yen (free of charge for primary school students and under). Ticket reservations are not necessary.

The "Noh-gaku" and "KAGURA" (Shinto music and dance) APU circles will hold a joint performance called "Sakuratsuki" from 19:30 on Tuesday, May 1st. Members of the public are welcome to attend free of charge.

Through the performance the participating circles plan to welcome the new students, as well as familiarize them with traditional Japanese culture. With its multicultural environment, there is no doubt APU is the most fitting venue for such an event.

The program will include for Noh-gaku, "Funabenkei" (based on a historical epic), and "Hagoromo" (based on 'The Feather Mantle') to be performed with special guests. The Kagura program lineup consists of "Orochi Taiji" (tale of a giant serpent) and "Shibahiki" (traditional). The members have been working hard to ensure the success of this event. 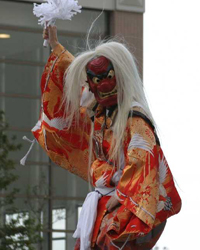